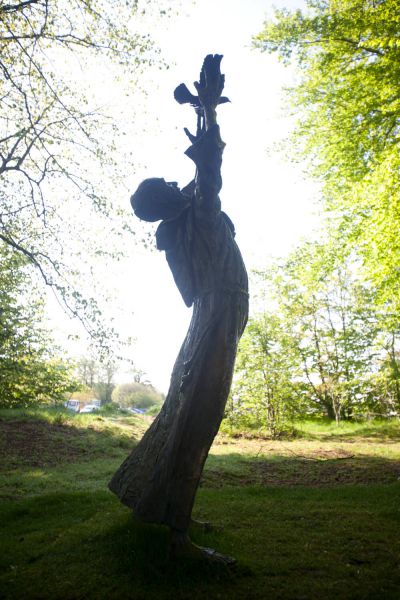 St. Columba also known as St. Colmcille is one of the three patron saints of Ireland, along with St. Patrick and St. Brigid.  Columba is the Latin version of Colmcille, his Irish name which means “Dove of the Church”.

Born in the small village of Gartan, Co. Donegal in 521 AD, he descended from royal blood and ranked as high as the king of Ireland.  As a boy, Columba was sent to live with the priest who’d baptised him.  After attending the monastic school in Moville he moved to live and study with the Christian bard, Gemman and during this time his love of discipline, poetry, and knowledge came to life.  He entered the monastery at Clonard Abbey, County Meath, where he became a monk and was ordained as a priest in 546.

Later that same year he is believed to have founded his first monastery in Derry on a site that was granted to him by a local king.  Doire Calgach was renamed Daire Coluimb Chille or “Oak Wood of Colmcille” in his honour.

He is believed to have said:

“the angels of God sang in the glades of Doire and every leaf held its angel.“

Columba spent many years travelling around Ireland founding many churches and monasteries before he left for Scotland. The abbey he founded in Derry remained the dominant religious and political centre in the region for centuries.

Today, the St. Columba’s Long Tower Church stands at the spot of this original settlement.